The Chairman of the University Debating Society, Gerard, attends our church on Sundays and Tuesdays. He asked me if I would take part in the weekly debate on Thursday March 15th, making the proposition “That this house believes in Creation rather than Evolution.” So I said I would. How many attend, I asked. As low as six people and up to seventy, depending on who is the speaker and what is the subject, I was told. In the old days of the University, that is, the first sixty or seventy years of the century, the weekly debate was a central college event with hundreds attending. No other function was allowed to be held on debate night. Prominent politicians could easily be enticed to take part. It used to be dominated by theological students from the Presbyterian Seminary. It appealed to the liberal ethos that all disputes could be solved around a table in a discussion with the humanistic agenda always winning. A truce has been declared in the battle for ideas. There are few political causes, and there is much more money available and scores of pubs in Aber. People are cynical about discussions – “jaw jaw.” Nothing interests people. All opinions are equally valid, creationist or evolutionist, whatever works for you, it is too wearying to have to think and read and discuss these things. Let’s go down the pub for a drink.

When I got to the small lecture room where the debate was to take place a few minutes before 7.30 there were two people present, and then some folk would trickle in. Three came as I was finishing my speech and left half an hour before it ended. There were about 30 present. Two of the Christian students distributed creation tracts on each seat.

I don’t do this sort of thing. I don’t keep up with evolution. I can’t pronounce those words – the proterozoic era, the ichthyostegid amphibian and his crossopterygian ancestor, and was Ramapithecus an early hominid? Trying to talk like that I would sound as phoney as the Jehovah’s Witness on my doorstep who tells me what the Greek of John 1:1 means. You need a Ken Ham or a Duane T. Gish who do it all the time. I had no swagger, or style, or jokes, just my stoop and nervous air…I was not winsome and was serious. Ho hum.

I began by quoting the first three verses of Genesis one whose sentences are marvellously robust and assertive. I told them I believed it and the only way we can know if they are true is by faith. We can’t run a controlled experiment to see if it were so. I believe it because God’s glory is seen in his handiwork, his power and deity. Men’s consciences affirm that this is so. I believe it because Jesus said that in the beginning God made them male and female and for me the one who preached the Sermon on the Mount can say nothing wrong. The New Testament says that he is the one who made everything and that without him was nothing made that was made. I believe it because he showed his creatorial power by multiplying fishes to feed 5,000, making not fish-eggs or fry or young fish but fish you can eat. He turned water immediately into mature wine.

So there is creation and there is also evolution. There is evolution, that is, there are potencies in the created stuff which can develop certain ways. Two dogs came out of Noah’s ark and today there are 200 breeds of dog. So there is evolution, but there is not creation by evolution. Creation is firstly a sovereign act of God in nothingness making the heavens and the earth. Creation is also God working upon the already existing stuff making something else – men (our first parents) and animals from the dust of the earth. So you would expect to find parallels and similarities between man and the animals because they are both made out of the same stuff by the same Maker. You would expect to find the identical design of a heart in a pig and a man because the divine economy does not spread diversity unnecessarily.

We are not to think of evolution as some cold cerebral process that deals with the facts, while creation is all about religion and credulity. We creationists examine the facts too. It is in the interpretation placed upon the facts that the disagreement lies. Every scientist until the mid-19th century was a creationist. The impulse to the scientific endeavour comes from the belief that what we have in the world is worthy because it is the very creation of God. Man is believed to be made in God’s image and so medical science has developed because of this exalted view of the worth of a human being.

Evolutionists are also romantics and speculators. In the Times on 23rd February there was a typical fanciful evolutionist theory splashed over half a page with Mormon-like graphics telling of an alleged catastrophe that took place 250 million years ago which almost wiped out life on the earth caused by a meteor, seven and a half kilometres wide, hitting this planet. Then a few pages later it reported the BBC Horizons programme which had promoted the theory that the earth 600 million years ago the world was a great snowball. What wild theories, but it is almost beyond the pale to raise an eyebrow at them because they come from the evolutionist stable. So the choice of evolution or creation is not between solid facts and man’s beliefs, but two kinds of beliefs. Does the evidence evolutionists look at support their beliefs? I do not believe so. All was over in the required ten minutes when I was stopped by the chairwoman’s gavel.

Then there was to be the evolutionist speaker presenting the case. Now the students had gone around the science faculty and put notices on the boards there asking for a lecturer to volunteer and speak up for evolution against creation, and, would you believe it, every single member of the faculty had refused to speak. So old Rufus, a second year student who has begun to attend our church on Sunday nights, spoke. He did all right, gathering what scientific evidence he could on the lineage of man going back to Neolithic man and the primates. He had to pronounce the unpronounceables. The students who had respected my grey hairs and seniority and nervousness by never interrupting me once did interrupt him constantly with points of order and points of fact. He was fine, taking it all in good part.

Then it was open to the floor, five minutes for each speaker alternately for and against the motion. They all spoke well. There was no harsh disdain of Christianity – just the usual patronising posture. Loads of banter, good spirits. I felt ancient. The student speakers had all the nitty-gritty scientific evidence arguments – carbon 14 dating, the missing links, the humour. Dan told of the man fishing who threw back into the lake all the big fish he had caught keeping just the little ones. “Why?” someone asked him. “My frying pan is only 18 inches across,” he said. So too the evolutionist keeps only the facts that fit in with his theory and throws all the others back into brute factuality where they become mute factuality (that’s my Van Til). But the evolutionists all had their say, and when everyone finally had spoken Rufus and I had to sum up. I spoke about the utter implausibility of the absolute and utter nothingness out of which everything suddenly and spontaneously appeared in one enormously dense heavy atom. I called it the ‘lump’, and Shakespeare was in that lump, and Mozart, and Hitler, and Jesus Christ, and all of us. And the world today is simply worshipping that lump. I said that evolution was a system of despair as it claimed that things had always been eternally like this and would be, man as bad as he could be. I spoke of the hope that creation gave, man once made in paradise, perfect, created in the image of God, and presented with the possibility of that same God renewing him again in the image of holiness and truth. Rufus then gave his evidences for man having evolved. There was the vote, and we creationists won by 15 to 10 and the bottle of wine for the best speaker was given to a creationist student who goes to St Michael’s church.

They were very kind to me. I was out of my depth. If my supporters from Alfred Place students had not come we would have lost, but not so many came as to swamp the meeting. One needs to do this sort of thing often to be at home. I am not mixing enough with sinners to win them. I was not shattered by the experience because they were a small respectful gathering. It was a good experience – Grandpa amongst the youngsters.

Banner of Truth has published an excellent new paperback on creation, “God and Cosmos: A Christian View of Time, Space, and the Universe” written by John Byl, the Professor of Mathematics and Head of the Department of Mathematical Sciences at Trinity Western University, Langley, British Columbia, Canada. Dr Byl gained a Ph.D. in Astronomy at the University of British Columbia and is the author of numerous published papers. 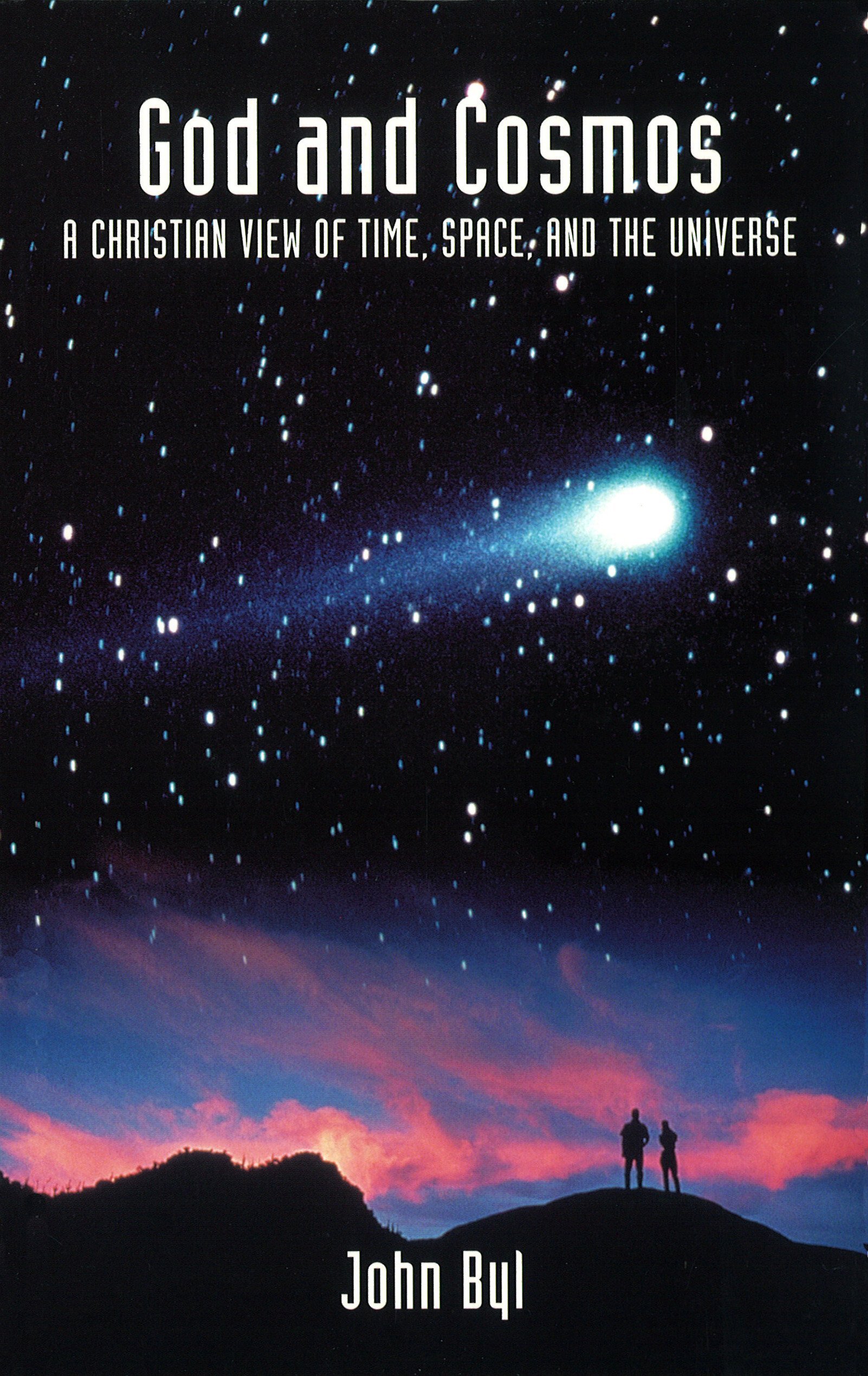 A Christian View of Time, Space, and the Universe

The Chairman of the University Debating Society, Gerard, attends our church on Sundays and Tuesdays. He asked me if I would take part in the weekly debate on Thursday March 15th, making the proposition “That this house believes in Creation rather than Evolution.” So I said I would. How many attend, I asked. As low […]