O Death Where is Thy Sting?

I have just completed the best book I have read for years, or perhaps in all my life. It is hard to be sure of that, of course, but it must be up there with the most life-changing books that providence has brought my way. It is the book that I hope will be read to me in my last days on this earth, for it is full of the Saviour who has covenanted to take me and every believing, repenting sinner to himself. It is called O Death Where is Thy Sting? a book of fifteen sermons preached by Professor John Murray  and published in 2017 by Westminster Seminary Press (most for the first time).

Mr. Murray was beautiful in life. I was reminded of this again at the Twin Lakes conference in Mississippi earlier this year. There I met up again with an old friend, Larry Mills, whom I first met at Westminster Seminary in 1961. He and his wife were immensely kind to me, and during his years there Sally Mills had a stillborn child. He told me that within hours of the child’s arrival, Mr. Murray and Dr. Van Til came to the hospital individually to express their sympathy to Sally and Larry and offer to help in any way.

This month of May 2018 marks the forty-third anniversary of Mr. Murray’s death. This book will make its author come alive to those who never knew him and awaken gratitude in those who were his friends, colleagues, and former students. It has a host of small attractive features, it is a hardback edition with a sober blue dust jacket illuminated by lines and leaves of gold. Each sermon begins on the stronger right hand page, often leaving the left page blank. Its indices are exhaustive and comprehensive. Its technical details focus in the sermons and where there is reflected a fuller more exegetical treatment of the texts in Mr. Murray’s commentary n Romans. In the book about half the sermons give us the privilege of hearing Mr. Murray’s opening prayers, permeated with the Authorised (or King James) translation of Scripture so that his prayers are the Words of God sewn together. There is one long pastoral prayer, magisterial and humble like all true prayers are. All these features indicate the enormous respect the Seminary has for its beloved first professor of theology – it wants to honour him, and others to honour him too.

One gets a glimpse of this attitude to the author in reading the tributes that 27 of the good and great of the evangelical and reformed would pay to the book in the first 12 pages; a quite excessive feature, but reflecting the influence that Mr. Murray continues to have, and of which he would be surprised. Allow me to quote a few sentences from some of these commendations.

‘Here is a collection of sermons without additives — no unnecessary words, no superfluous illustrations. I am thrilled to have this new volume which I commend with a measure of pride in the work of this Highland Scot!’ writes Alistair Begg.

‘The ongoing momentum of each sermon is breathtaking. . . We expect edification in a sermon, but these sermons give us pleasure as well’ writes Leland Ryken.

‘Seldom has justification by faith been preached with greater clarity or the Father’s love found a more passionate expositor. A feast for the hungry soul!’ writes Donald Macleod.

‘His awesome delight in the triune God is contagious. I was humbled and lifted up to worship as I heard Jesus proclaimed through these sermons’ writes Dennis Johnson of Westminster Seminary, California.

‘Honestly, if John Murray wrote a grocery list I’d read it, so when he writes on such magnificent topics there isn’t any good reason not to read him’ writes Mark Jones.

I will stop there. There are a dozen more who also write and identify with Mr. Murray and want a share in the reflected glory of the preacher and his sermons. This is the tone of voice with which we would also write, and which even the whole church should speak in being confronted with the book’s glorious words magnifying our Saviour. Mr. Murray is our exemplar of what free grace effectually accomplishes, and he is our spokesman. Here you find what it truly is to be full of the Spirit, or how the divine unction on a preacher is manifested, or what preaching in the Spirit is all about. The neo-orthodox movement has had a pervasive influence in the professing church for eighty years now: where are its preachers who fill churches and save the underclasses, the farmers, housewives, teenagers, colliers, and fishermen? Where are its books of sermons?

This response of unalleviated delight in the ministry of Mr. Murray is a new phenomenon. During his life he was considered orthodox, a spokesman for the old paths, safe but rather dry, ‘A dour Scot’ one famous preacher described him to me. The old joke was very tired to me (and utterly untrue) that his glass eye was his compassionate and kindly eye. What a change! Now there is doxology! There is unqualified praise. How they love him! How they have benefited from him! What a sweet sign this is of a new spirit of wisdom and discernment in the church.

As Sinclair Ferguson points out,

. . .what we have here is not Professor Murray’s manuscripts but the transcripts of the messages themselves, and this adds interest and vitality to teh words written. . . This is the ministry of a man to whom God providentially gave great gifts, but who never appeared to think of himself more highly than he ought.

So the book lies before us and the world. What will we do with it? Three of the sermons many readers already know. The Banner of Truth gave permission for Westminster Seminary to publish sermons 5, 8, and 15 from Volume 3 of The Collected Writings of John Murray, and this includes the magnificent sermon on ‘The Father’s Love’ from Romans 8:32, ‘He that spared not his own Son, but delivered him up for us all, how shall he not with him also freely give us all things?’ And there is his moving single sentence prayer at the end:

O God, do thou be merciful to us, meet our insufficiency with the abundance of thy provision, meet our unbelief with the power of thy grace, and grant that we may be able more and more to abound in faith, in love, and in hope, that we may put on the Lord Jesus Christ and make no provision for the flesh, but that we may lay hold upon all the promises that are yea and amen in Christ, and out of his fulness may we all receive grace upon grace, in his name. Amen.

So to the sermons. One is on the rich man and Lazarus, which the book has entitles ‘Lazarus and the Rich Man.’ I know this passage well; I have preached on it. The Chapel Library in Florida has produced a booklet of mine on this incident. I read Mr. Murray’s treatment of it with expectation. How fresh it is! How what I have said needs to be sharpened and clarified. Obvious insights need to be added. My main application of the sufficiency of Scripture is there too but how Mr. Murray declares it,

That sermon is not my most favourite. I could not choose one, but the sermons on the Father’s love (pp.73-89), and the priesthood of Christ (pp.157-171) are incredibly moving, but asking which is my favourite is like asking me which of my three daughters is my favourite. I love them all immeasurably and equally. Please get this book and so read it that you can understand my enthusiasm for it, but going on and surpassing me in the profit you gain from it, especially in deeper, stronger love for the Altogether Lovely One, so loved by the preacher in this book.

One little request, there are other recorded sermons of Mr. Murray gathering dust around the world, in Canada, Scotland, USA, and England. The standard has been set for their production. Let them be gathered and printed! When will we be blessed with volume two? I have just completed the best book I have read for years, or perhaps in all my life. It is hard to be sure of that, of course, but it must be up there with the most life-changing books that providence has brought my way. It is the book that I hope will be read […] 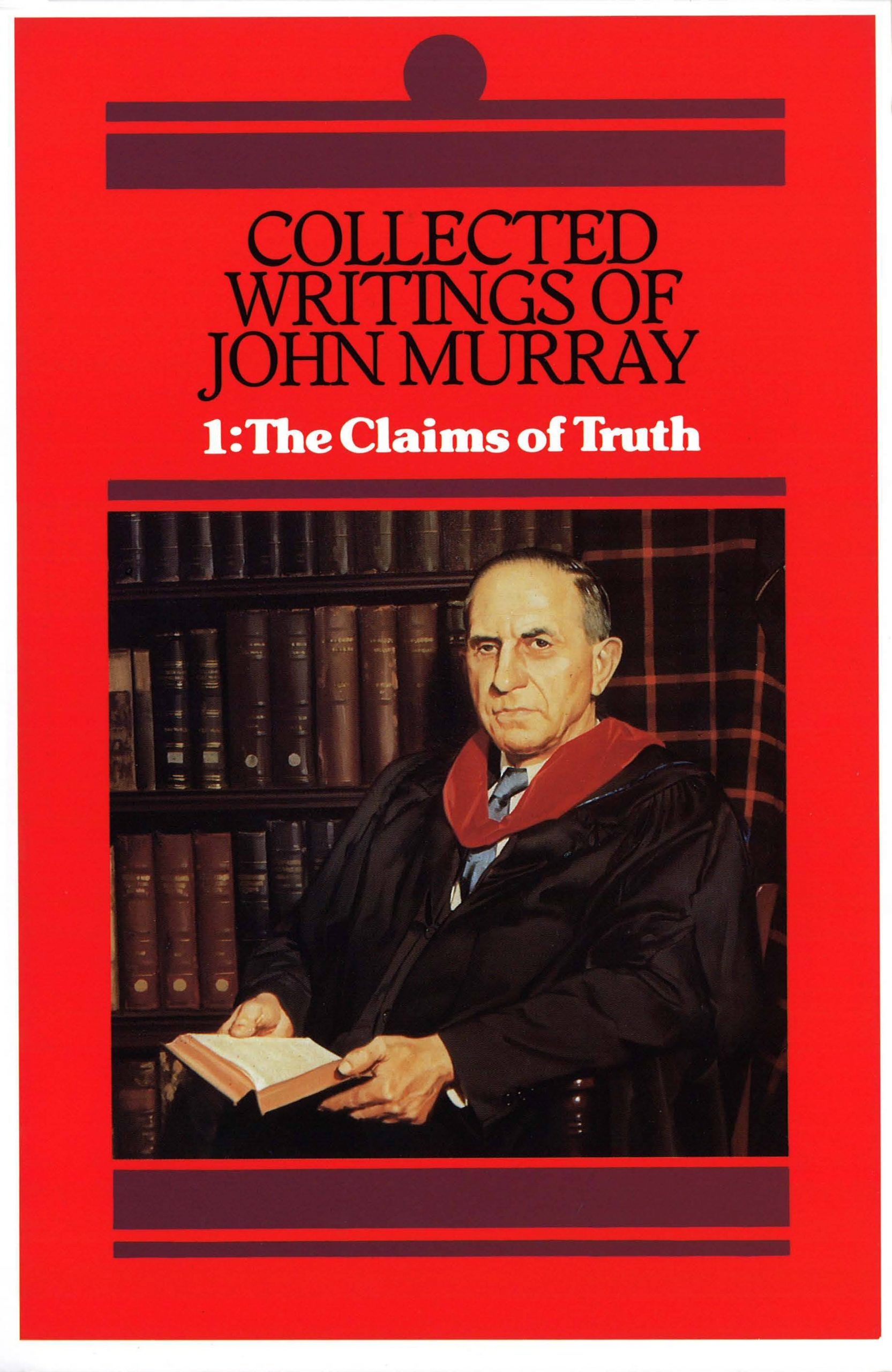 Volume 1: The Claims of Truth

I have just completed the best book I have read for years, or perhaps in all my life. It is hard to be sure of that, of course, but it must be up there with the most life-changing books that providence has brought my way. It is the book that I hope will be read […]