Review: The Fear of God

Published the year after his world-wide bestseller, Pilgrim’s Progress, this 1679 work on the Fear of God is misunderstood & neglected. Yet, anything from the pen of the converted tinker is worth its weight in gold. Bunyan was not only a master of the Word of God — ‘prick him and he bleeds holy scripture,’ — he was a Christian of rare distinction and experienced in the ways of the Lord and this world. He was soundly converted from a godless life, while listening in on a group of believers in discussion. They were affectionately described as washerwomen.

Bunyan served as a Parliamentarian soldier, was much influenced by his godly wife, came to respect the Fifth Monarchists, embraced the doctrines of grace, was drawn to Millenarianism, proved to be Baptist by conviction, & suffered at the hands of the Presbyterians! He spent more than one period in prison, for his integrity and genuine Christian convictions, as well as for breaking Conventicle rules, on nonconformist assembling, preaching, and praying.

Fear of God is a rare volume of considerable spiritual value. One has only to contrast the difference expressed by fear in a couple of Bible verses to see the need for a true appreciation. For the Christian this is complex. How, for example, do we marry the removal of fear by the Spirit of adoption, to the fear of God as a lifelong requirement? Referring to those born again of the Holy Spirit, Romans 8:15 declares, ‘for ye have not received the spirit of bondage again to fear; but ye have received the Spirit of adoption, whereby we cry Abba, Father’. Yet, inspired scripture also exhorts, ‘Let us hear the conclusion of the whole matter: Fear God, and keep his commandments: for this is the whole duty of man’ (Ecclesiastes 12:13).Is there a conflict? Is it down to simple biblical hermeneutics, or more serious, could there be real conflict within scripture itself? Open up any concordance, find the word ‘Fear’, see the almost incalculable number of references, and ponder, ‘Where do we go from here?’

Michael Reeves, (Foreword), believes it can be narrowed down to two basic types of fear of God: ‘people can have an ungodly fear of God or a godly fear of God. Ungodly fear is the fear of the rebel, the fear shown by Adam. . .in absolute contrast, the Spirit of God works in the believers a godly fear that draws them in wonder to God.’ Reeves desires we shall be rescued from an ungodly fear and be brought to rejoice and tremble at the God Jacob could call, simply, ‘The Fear’ (Gen. 31:42,53). Bunyan is certainly thorough. Basically there are six meaty chapters, The Object of our Fear, The Rule and Director of our Fear, Different Sorts of Fear, The Grace of Fear, The Privileges of Fear, and The Practice of Godly Fear.

Bunyan is typically Puritan. He chooses a theme, divides and subdivides, in a meticulous manner, yet, remarkably, he is never heavy or uninspiring. Like the proverbial cow, not only taking in the grass, but chewing the cud, to extract maximum benefit, he seems, admirably, to achieve his aim. The object of fear comes from God himself. His presence is dreadful, and why? Because of his greatness and majesty. His brilliant light, and his great revelation of love. These inspire our fear. In chapter two, Bunyan deals with the Ruler and Director of fear. It is the Word of God. He takes us to Psalm 19: “The fear of the Lord is clean, enduring for ever.’ Again, ‘The testimony of the Lord is sure, making wise the simple: the statutes of the Lord are right, rejoicing the heart: the commandment of the Lord is pure, enlightening the eyes: the fear of the Lord is clean, enduring for ever The written Word is therefore the object of a Christian’s fear.’

Every page of Bunyan throbs with life, light, and learning. One page would be sufficient for daily meditation. By the time he reaches the privileges of believers, and their filial fear of God (chapter five), he lists thirteen further reasons, for believers to revel in a righteous fear. Similarly, with the practical application of fear, do we really reverence God as we should? Is our respect for him absolute? Does it show in our prayer and fellowship with God? Every unconverted person, by nature, is bereft of fear and robbed of this precious privilege. This is truly a self-inflicted wound, born of unbelief and rebellion. Yet we are not to be high-minded but to fear our God, with love and honour (Rom. 11:20). Fear is, surely, hindered by covetousness, a major fault of our society (Ez. 33:31, Ephesians 5:5, Ps. 10:3). Twelve further biblical arguments, with cited scriptures and stirring devotion is presented.

Occasionally, Bunyan changes his style of approach — shorter more pithy sentences, less subdivisions, use of catechetical method, less doctrine — more application, or special treatment for those Himalayan verses from God’s Book. The end result is a thoroughness which leaves you despising the contemporary church, its shallowness and banality, and longing for a deeper, closer, more consistent walk, with the Lord. This little book is a treasure-trove in itself, waiting to be read, and re-read.

The volume finishes with a special word to hypocrites. Is there not a measure of hypocrisy in us all? This word fear God is conspicuous by absence, where pretence reigns. Michael Reeves is right. ‘where most assume that the fear of God must be the gloomy theological equivalent of eating up your greens, Bunyan shows what a delightful and helpful subject it is.’ A book to make your own, and a more than worthy addition to the Puritan paperback series. 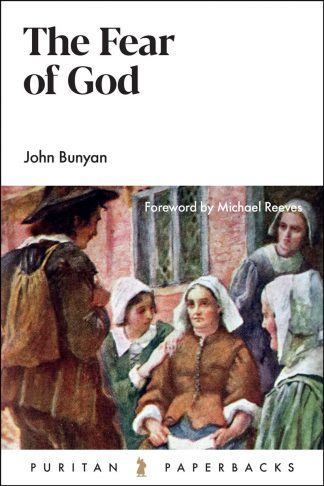 The Fear of God

Published the year after his world-wide bestseller, Pilgrim’s Progress, this 1679 work on the Fear of God is misunderstood & neglected. Yet, anything from the pen of the converted tinker is worth its weight in gold. Bunyan was not only a master of the Word of God — ‘prick him and he bleeds holy scripture,’ […]

Published the year after his world-wide bestseller, Pilgrim’s Progress, this 1679 work on the Fear of God is misunderstood & neglected. Yet, anything from the pen of the converted tinker is worth its weight in gold. Bunyan was not only a master of the Word of God — ‘prick him and he bleeds holy scripture,’ […]