How (Not) to Respond to a Long Expected Revival

Recently I was speaking in a part of the country known for its antagonism to the gospel. Church planting in that area is very hard work. The small number of confessionally strong churches are making headway, but slowly. I admire these pastors, evangelists, and church planters more than I can say; it is a pleasure and a privilege to spend time with them.

In the course of a meal with several of them, one pastor said, ‘I know full well that I may serve all my years working in the teeth of strenuous opposition that may get worse before it gets better. But suppose that genuine revival breaks out, whether in one church or in a larger region. What should my priorities be?’

Great question — not least because this brother was not awash in pessimism. While working faithfully in a day of small things, he retained confidence that the Lord’s arm is not shortened, such that he could not save. By this time, the pastor in question has a pretty good idea of what godly ministry looks like when the opposition is pretty intense, but he wondered how his priorities should change if the Lord in his mercy visited him with the blessings of reformation and revival.

As it happens, I’ve been on the edge of such visitations a couple of times. In 1970–1971, when the so-called Canadian Revival swept through parts of Western Canada, sparked by ministry led by the Sutera twins, I was serving as pastor of a church in British Columbia. And then, brought up as I was in French Canada, I witnessed the unprecedented (for Québec) multiplication of about thirty-five French-speaking churches to just under five hundred, in eight years (1972–1980). More importantly, I’ve tried to read some of the histories of revivals in various corners of the world, partly to think through what is genuinely of God and what is not. As a result of my own experience and of my reading, filtered by what I understand Scripture to say, my list of dos and don’ts when revival comes, in no particular order of importance, would look something like this:

1. Re-read some serious literature about what is real and what is most likely fraudulent in revival. You cannot do better than to begin with A Faithful Narrative of the Surprising Work of God, and A Treatise Concerning the Religious Affections, both, of course, by Jonathan Edwards. Edwards is remarkably open to various displays, but the real test is never the display but God-centered righteousness, gospel-fueled integrity. About a century after Edwards, some ‘revivals’ in Kentucky and elsewhere produced a disproportionate number of illegitimate births nine months later. One can guess why: emotional intensity often combines with human intimacy which, if it is not of God, is more likely to produce babies than righteousness. Knowledge of abuses easily breeds a slightly supercilious cynicism, while infatuation with revival easily breeds naïveté. Don’t be cynical; don’t be gullible; be discerning.

2. Examine your own heart; fan the flames of personal devotion to Christ. Abundantly use the ordinary means of grace: that is, instead of relying on the intensity of the revival, turn again and again to Bible reading, prayer, self-examination and confession, death to self-interest, a joyful focus on the cross, faithful evangelism, service, and eager anticipation of the glories yet to come. If instead you rely for your sustenance on the sweeping movement of the revival, ignoring the ordinary means of grace, you are likely to burn out in a frenzied pursuit of what is instantly gratifying but not very nourishing.

3. When revival comes, large numbers of people display boundless energy for the things of God. In your role as a minister of the gospel, direct that overflowing energy toward Bible study and prayer, toward corporate worship that is full of the Word, not toward revival experiences but toward Jesus himself. Times of revival are clarion calls for increased commitment to anointed expository preaching, not an excuse for informal chats studded with pious clichés. One of the great things that happened in connection with the Québec movement was the far-sighted establishment of SEMBEQ (=Séminaire Baptiste Évangélique du Québec), which became a conduit for the theological and pastoral training of that generation and the next. It is easy to think of genuine movements of God that petered out in silliness and warm nostalgia, because the energy released in the movement was never directed toward training.

4. Keep out the press. Transparently, that’s not possible, not even strictly advisable—but work toward that end. More precisely, if in God’s mercy you find yourself serving in a time of great blessing, do not announce it, do not ‘puff’ it, do not promote it. By all means work to expand the ministry, but by service and teaching and preaching, not by gimmicks. Eventually, of course, the press will find you. Then you must answer questions with self-deprecation, with lots of emphasis on the matchless grace of God, with a steadfast refusal to promote ‘stars’ and ‘celebrities.’ Do everything you can to avoid the ‘experts’ who arrive en masse, trying to analyze the revival and ‘catch’ the revival to carry it somewhere else. One of the great advantages enjoyed by those involved in the work in Québec between 1972 and 1980 was the language barrier: most American press voices didn’t know enough French to find out what was going on. Today, of course, the quickest forms of distribution of information (and of vicious attacks, too) are not tied to the organs traditionally labeled ‘the press,’ but to the social media — and they are much more difficult to avoid. But amongst the leaders where you have influence, foster restraint, a refusal to get caught up in every outraged blog, a quiet perseverance in faithful ministry while remaining highly suspicious of the siren call of renown, especially your own.

5. Eschew manipulation. During the Canadian revival, I recall the spontaneous testimony of a man who had been minding his own business, a happy secularist who was oblivious to the rising movement, when suddenly he felt compelled to enter the church building in Saskatchewan where the revival began, where he was crushed by the convicting work of the Spirit, heard the gospel, and was dramatically saved and transformed. His testimony was captivating, compelling, powerful — a tool God used to bring others to repentance and faith. Sadly, a pastor (not from that church) caught up with the man and persuaded him to embark on a speaking tour in which he would ‘share his testimony’ at major venues across Canada. I heard it in Vancouver. The words were the same, the story was the same, but the whole thing had become canned. What was a spontaneous and Spirit-anointed testimony became a bit of manipulation in an effort to spread the revival elsewhere. Christian leaders who should have known better were relying on moving testimonies that were no longer spontaneous and irrepressible outpourings of God’s grace, but were substitutes for preaching Christ and the cross. It would be easy to provide many examples where the line between zeal and manipulation was breached.

6. Never imagine, not for a moment, that this movement from the Spirit of God depends on you. Why is it that during the twentieth century, South Korea witnessed spectacular growth in converts and theological maturity, while Japan struggled with minimal numbers? Are we to conclude that the leaders in South Korea were much more capable or gifted than those in Japan? Why is it that a Josiah presides over national revival, while a Jeremiah devotes his life to tears, discouragement, and judgement? If God gives you the privilege to participate in a time of great renewal, thank him for the opportunity, give yourself to being a faithful conduit of God’s blessings, but do not presume that God is rather lucky to have you. Cultivate humility.

7. Beware the dangers that attend a movement’s popularity. Many pundits have observed that today in many parts of North America, the number of nominal Christians is falling off rather rapidly. This development is fuelled by the fact that there are rising social and cultural forces that are marginalizing and opposing Christians and Christianity. Where opposition abounds, numbers of nominal Christians decline. The result is that it is getting easier and easier to discern who is a genuine Christian. Conversely, however, a movement faces a new set of dangers when it becomes popular. Not infrequently, when a reforming and revivifying movement breaks out, it is initially opposed, but once it becomes popular, a lot of people want to clamber on board. And that means leaders need to ask God for discernment.

8. Restrain yourself from offering purely naturalistic explanations. During a movement of genuine revival, and certainly in its aftermath, many people will ask what the circumstances were that precipitated it. Usually it is easy enough to make a list: a praying circle of brothers and sisters, a time of spiritual declension that made some people really eager for renewal, cultural unrest and upheaval (in Québec, it was ‘the Quiet Revolution’), and much more of the same. Usually it is entirely reasonable to look at such phenomena and see God’s providential hand in them. Nevertheless there is an unhealthy way of reporting these phenomena—a way that gives the impression that these things were sufficient in themselves to bring about revival, a way that implies if you could duplicate these phenomena elsewhere you could bring in revival there, too. A little reflection, however, suggests that all of those accompanying cultural phenomena could take place without revival, that no one predicted the onset of revival on the basis of such phenomena. God will not be tamed. Detailed analyses may serve no end other than our own self-promotion. The analyses tend to give the impression that we control the movement, though of course we’d never by so crass as to say so. By all means ponder the enormously complex intertwinings of history and culture, by all means discern the providential hand of God in them, but leave plenty of space for simply confessing, ‘This is the Lord’s doing, and it is marvelous in our eyes.’ Its Origin and Development 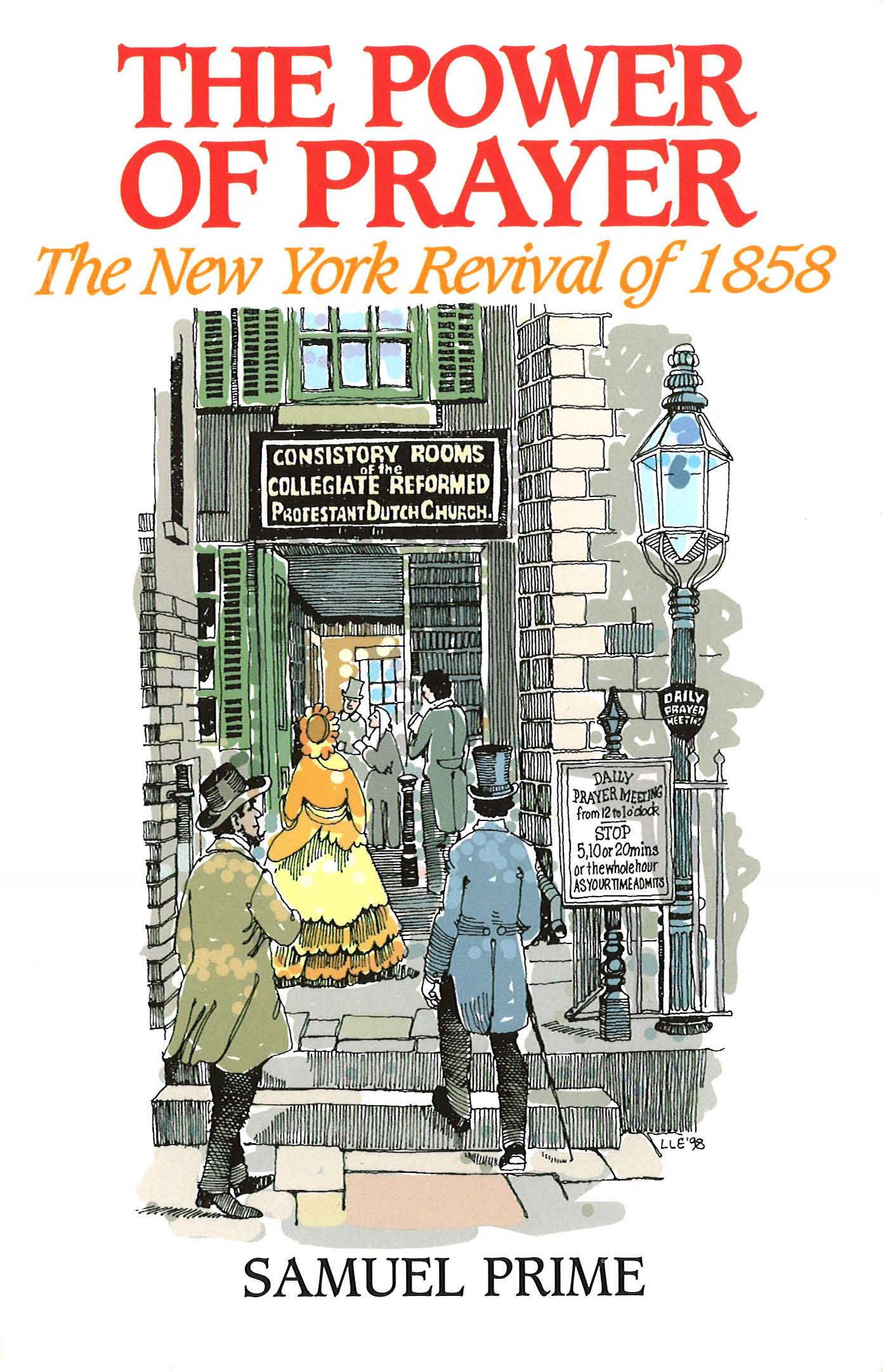 The Making and Marring of American Evangelicalism 1750 - 1858