I overheard someone asking a newcomer at the Westminster Conference if he were enjoying the conference. There was a pause and then a thoughtful, ‘. . .yes’. Not a resounding, ‘You bet!’ A considered response as though it was turning out to be not the kind of conference that he was expecting. It is not a family conference. It is overwhelmingly male and middle-aged aimed at how historical figures and controversies can cast light on the contemporary scene. These ideas are presented in the form of papers read by six invited men and read out, to be discussed on the spot, and later printed in an annual book of six papers. We speakers this year were encouraged to abbreviate and declare our material freely, not thinking we had to be reading out the completed written version, being shorter and more preachy. That was the order of the day, and I felt that all the speakers did that. It is certainly a democratic conference. There are no big personalities. Six different chairmen, all excellent, prayed and then introduced the speakers and later tried to keep the discussion on track developing a theme. Not easy, especially if the theme is a bee only in the chairman’s bonnet while we make half-hearted responses as we refuse to be snared by his suggestions and then have nothing to say.

The first paper was given by one of our favourite people, Dr Paul Wells who spent over thirty years in Aix teaching theology, and so well qualified for a masterly paper on Amyraldianism. His four headings were

One thing that helped me to think was hearing a comment in one passing reference of Paul Wells to the familiar aphorism that the cross is ‘sufficient for all but efficient for the elect.’ Dr. Wells raised the question that if it were sufficient for all why wasn’t it efficient for all. Then you can look for an answer in the purposes of God, or you can plead man’s free will, but if you do the latter then the verses in the Bible that announce man’s inability rise up and demand they be confronted seriously. The discussion was happy. The few Amyraldians present were warmly welcomed as last year an Arminian husband and wife were made to feel at home (but they did not return this year, alas). One hopes the Amyraldians will come back.

I enjoyed hearing R. C. Sproul speaking of a man who came to him after a talk, thanking him warmly. ‘And you, where are you from?’ asked R. C. ‘Oh, I am just a layman,’ the man replied. ‘I am a Noel Christian.’ R. C. was puzzled, wrinkling his brow, ‘what is a “Noel Christian”‘ he asked. The man replied, ‘The Five Points, T.U.L.I.P.; T, total depravity. U, unconditional election. And I believe them both. I, irresistible grace. P, perseverance of the saints. I believe them both also. I just don’t believe in the L, Limited Atonement. I am a No L Christian.’ He was an Amyraldian, a No L Christian. The Amyraldian challenges us with the question, ‘Can there be sincerity in the offer of the gospel to all in the absence of intention?’ What a splendid question for discussion. Get the book of the conference papers. There was no recording of this first lecture given to us by Paul in that soft Scouse accent.

Then I gave the second paper on Arthur Pink. I felt it went all right. Both friends and strangers wrote to me beforehand from three different continents to inquire and to offer assistance. Numbers continue to tell me of the change that came into their lives when they read Pink’s Sovereignty of God. The book has had enormous influence and was one of his first books. He was 32 years of age writing it, and it displays youthful freshness and enthusiasm. He could be described as a high Calvinist when he wrote it, but he was never a hyper-Calvinist. He wrote over fifty books and improved with age. The last 18, written in his Stornoway exile, are amongst his finest, but he is always worth consulting, well . . .except for his first couple of dispensationalist books, long out of print. He was prepared to change his mind even when he had put his ideas in print. That is fine humility. There were stretches of his life when he was disconsolate, partly from the many closed doors he had met. He grew old in Scotland, and life was fleeing away and the letters from people asking for counsel kept flooding in relentlessly, more than a dozen on one day. He used his Sundays to counsel his correspondents. Pity. He couldn’t give an hour on a Sunday to the local English language congregation. That was a serious omission of church attendance that lasted throughout his last 8 years. Pink lived under spiritual and economic and social pressures that few others have to face today.

The third paper was given by Philip Arthur on The Great War, 1914-1918. He always speaks helpfully at this conference and this was no exception. We were given much fascinating detail, for example, the so-called ‘thankful villages’ where all the boys who had gone to war returned home safe and sound. No such villages existed in Scotland or in Ireland. 750,000 people in Great Britain were killed, one in three of the 19-22 age group — the lost generation. 232 generals were injured or killed. The death roll was so high because of the new armaments and the short no man’s land between both sides. Victory was celebrated by the churches and the nation, but the cost was very high. There was no subsequent discussion at the conference as to whether it was a just war or not. Evangelicals then and now have been divided over that, unlike the Second World War in which the justice of resisting Nazism to war was and is largely accepted.

Wednesday morning was a big discovery for me. James Eglinton, the Meldrum lecturer at Edinburgh University in Reformed Theology, spoke of Herman Bavinck under two headings, why read him and how to read him. 1848 was the year for the freeing of the seceders outside the state church in the Netherlands from the restrictions imposed upon them by the Dutch government. Before 1848 the state church decided what was true and right. Those pronouncements became muted subsequently and the Dutch began to experience living in a secularised state. Kuyper became the leader and spokesman of the seceding churches. He did this by taking Scripture seriously and reverently, the Bible having an a priori authority (probably thus came the presuppositionalism of Cornelius Van Til’s apologetics). Scripture for these men was self-authenticating. Bavinck also wrote a positive foreword to the Dutch translation of Matthew Henry’s commentary. Bavinck possessed a lovely catholicity of spirit. His writings can be better understood if you know something of the background against which they were written and the structure of his four volumes. Volume one is the toughest to grasp. The book on preaching which he wrote is helpful, though there is just one sermon of Bavinck’s extant. The seceder tradition favoured a preacher having no notes at all. There is also a single volume summary of the four volumes, and in the New Year the first of his three volumes on Reformed Ethics is appearing. All this was most helpful and James’ familiarity with his material and his ease in teaching us made these few hours a wonderful delight. His own origins are in the Free Church in Inverness and the former ‘Free Church College’ (its name has changed) and he lived for three years in Holland.

Jeremy Walker spoke in the afternoon on John Owen and the Person of Christ. In the year 1679, four years before his death, Owen published his ‘Christologia’ and subtitled it ‘A Declaration of the Glorious Mystery of the Person of Christ — God and man’. It was written at a time of theological, ecclesiastical, political and social turmoil. Jeremy was able to outline the times magnificently, and no one can explain any better than him the thesis opened up by Owen. It was done vigorously, with exhortation and quotation, but Owen’s writings are so dense that following him by the ear through quotations is quite challenging. When I had students or assistants we would have a meal together and then sit in two arm chairs with one Banner of Truth paperback of Owen in modern English compiled by Dr. Law and we would read aloud alternate paragraphs, either of us commenting when necessary on what Owen was saying, its importance and relevance. Then at the end of the chapter, usually approaching an hour, we would pray together. We did that once a week.

The final paper was given by Nigel Graham, the Pastor of Warboys’ Grace Baptist Church, on ‘The Life of David Brainerd: the Story, the Book, the Impact.’ One of Nigel’s predecessors at Warboys was the late David Bugden a former secretary of the Westminster Conference. Nigel spoke very winsomely on Brainerd, that influential evangelist. He was an early 18th century missionary to the Native Americans and he eventually had a particularly fruitful, brief, awakening ministry among the Delaware Indians of New Jersey and Pennsylvania when hundreds were converted. Much of Brainerd’s influence on future generations can be attributed to his diary which was taken by Jonathan Edwards in whose home he was to spend his last days, nursed by one or two of his daughters. The book was first published in 1749 under the title of An Account of the Life of the Late Reverend Mr. David Brainerd. Edwards believed that this life of Brainerd would have lasting value. It certainly did. The importance of the book was immediately recognised. John Wesley urged his preachers: ‘Let every one of them read carefully the Life of David Brainerd’. The most reprinted of Edwards’s books, it has never been out of print and continues to influence subsequent generations, for example the martyr Jim Elliott, mainly because of Brainerd’s single-minded perseverance in his work, the great blessing he received, his uncomplaining spirit in the face of significant suffering and his early death before he was 30. It was good for the whole conference to be reminded of this brave young Christian.

Next year’s conference is on December 3 and 4. I overheard someone asking a newcomer at the Westminster Conference if he were enjoying the conference. There was a pause and then a thoughtful, ‘. . .yes’. Not a resounding, ‘You bet!’ A considered response as though it was turning out to be not the kind of conference that he was expecting. It is not […] 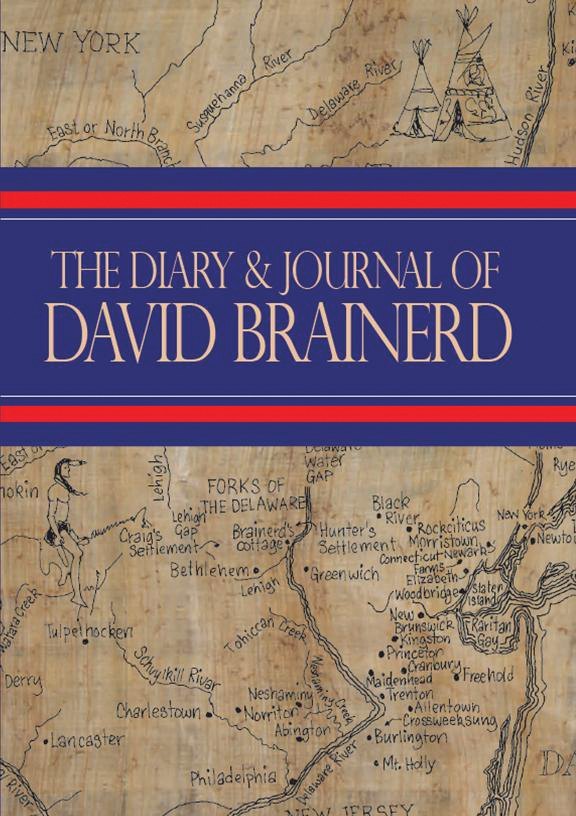 Diary and Journal of David Brainerd

Preface and Reflections by Jonathan Edwards

I overheard someone asking a newcomer at the Westminster Conference if he were enjoying the conference. There was a pause and then a thoughtful, ‘. . .yes’. Not a resounding, ‘You bet!’ A considered response as though it was turning out to be not the kind of conference that he was expecting. It is not […]